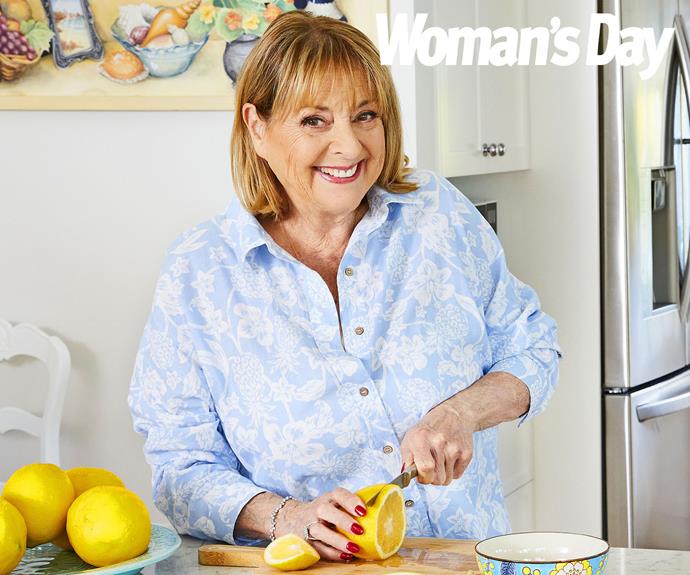 We are delighted that Denise Drysdale is raising awareness, by talking about her Diagnosis with Trigeminal Neuralgia.

The article below was written for Woman’s Day

”I haven’t really laughed in over a year – my life had become a nightmare of agonising pain and fear.”

As she welcomes Woman’s Day into her Gold Coast home, Denise Drysdale is not only jumping with joy but her irrepressible sense of humour is back with a vengeance!

It’s been a long time coming for Denise, 73, who, in her first interview since vanishing from the spotlight, opens about her harrowing health crisis and life-changing brain surgery.

“It’s great to be laughing again. I haven’t really laughed in over a year – my life had become a nightmare of agonising pain and fear,” confesses the two-time TV WEEK Gold Logie winner.

For the past 13 months the usually upbeat star had been grappling with the immensely painful facial condition trigeminal neuralgia (TN).

In May 2021 “Ding Dong” experienced her first TN flare-up, something she says she’ll never forget. Describing the pain as “unbearable” and “searing”, Denise reveals it became so intense she struggled to breathe.

“It was like a white-hot lightning bolt that would shoot across my face. The tiniest thing set it off, like smiling, brushing your teeth or hair, or blowing your nose.”

The star says the agonising episodes became more excruciating and frequent, and she would experience around five attacks a day.

So bad did things become, Denise struggled to get up in the morning.

“I would inch myself up slowly, so as not to trigger it off. There were times I’d burst into tears, fearful of when it would next strike,” she says.

“Stupidly, I thought it would work itself out. I’m a stoic person and very little rattles me. I was hoping it would just go away, but it didn’t.”

Feeling increasingly anxious, Denise says she withdrew from life, stopped seeing friends, turned down work and holed herself up at home, dreading the next agonising spasm.

“It became so debilitating that I bit the bullet – I was referred to a specialist, who diagnosed trigeminal neuralgia.

But worst of all? “I couldn’t remove the cork from a bottle of bubbly!”

Following Denise’s TN diagnosis, she underwent regular acupuncture therapy, which provided some pain relief but was not a cure.

“In September last year I was taken to a Gold Coast hospital by my eldest son Rob, who found me writhing in agony.”

At times, Denise admits she sunk into a terrible depression. “I feared the crippling pain was going to be my life. That I couldn’t go out, couldn’t have fun with friends, couldn’t smile, couldn’t cuddle my grandkids or go to work.”

Denise kept her painful ordeal quiet for fear of being seen as a hypochondriac.

“I seemed to be lurching from one medical horror to the next, and thought people would be sick to death of hearing about my latest malady.

“To know my two boys, Rob and Pete, were worried sick upset me,” she says, noting that when her eldest grandson Bodhi, 10, remarked, ‘Nanny, I wish you weren’t in pain,'” she burst into tears.

Denise was told by her TN specialist that brain surgery was the best bet in terms of finding lasting relief.

“The notion of brain surgery terrified me. But I’d tried everything else, from medication to an array of other treatments. In utter despair I agreed to fly to Sydney to undergo the surgery, which I did in June.

“The surgery lasted two-and-a-half hours, and it left me with a small scar at the base of my head near my right ear, which is now healing beautifully. Dr Ben Jonker, my neurosurgeon, must have learned sewing from the nuns,” she chuckles.

“From the moment the anaesthesia wore off, I felt different and there was no pain. I couldn’t believe it.  Over a month on still no pain. I’ve got my fun-filled old life back.”

Indeed, Denise has emerged from a complete nightmare and is confident in saying there’s a sense of normalcy again.

“My energy is back and it’s fabulous to play with my grandkids, Bodhi, Xavier and Heidi. To cuddle my darling fluffball Mr DD. To be back in the kitchen cooking for my family. To be enjoying life again.

“My message to anyone suffering horrendous pain is go and see a doctor. Don’t put it off. If you’re diagnosed with TN, do your research – there are some terrific support groups that provide invaluable assistance – and try to find the best neurologist you can.

“There’s no need to suffer in silence. I learned that lesson the hard way.”

Denise Drysdale talks about her Diagnosis of Trigeminal Neuralgia