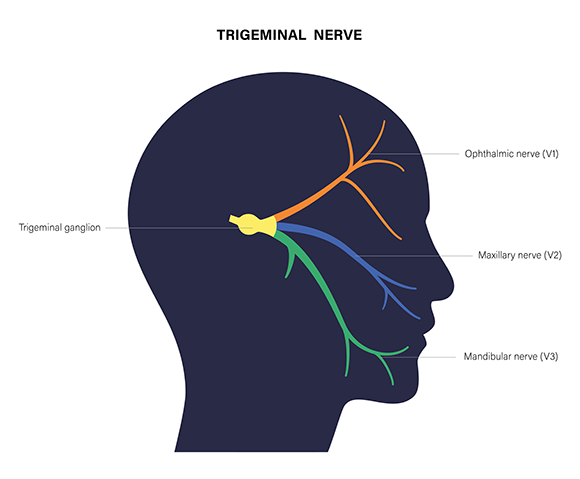 Trigeminal neuralgia (TN or tic douloureux) is a disorder of the fifth cranial (trigeminal) nerve that causes episodes of intense, stabbing, electric shock-like pain in the areas of the face where the branches of the nerve are distributed – lips, eyes, nose, scalp, forehead, upper jaw, and lower jaw.
​
The attacks of pain, generally last several seconds but may be repeated one after the other, throughout the day. The attacks may come and go and last for days, weeks, or months at a time, and then disappear for days, months or years.
​
TN is present in 100 to 200 people per 100,000 and new TN cases occur in 5 people per 100,000 each year.

Pain triggers may include:

TRIGEMINAL NEURALGIA – TYPE 1 (TN1)
Facial pain of spontaneous onset with greater than 50% limited to the duration of an episode of pain (temporary pain).

TRIGEMINAL NEURALGIA – TYPE 2 (TN2)
Facial pain of spontaneous onset with greater than 50% as a constant pain.

TRIGEMINAL DEAFFERENTATION PAIN (TDP)
Facial pain in a region of trigeminal numbness resulting from intentional injury to the trigeminal system from neurectomy, gangliolysis, rhizotomy, nucleotomy, tractotomy, or other denervating procedures.

ATYPICAL FACIAL PAIN (AFP)
Pain predominantly having a psychological rather than a physiological origin.